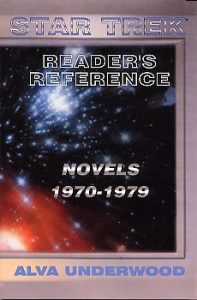 A fan of Star Trek since seeing her first episode “Devil in the Dark,” Alva Underwood has provided a wealth of information about that world as offered in the first twelve novels that appeared between 1970 and 1979. She has brought together, as much as possible, far-flung information from a variety of sources, providing complete documentation of sources and bibliography. Offered here are biographies of Kirk, Spock, McCoy, Scotty, Uhura, Chekov, Sulu, Chapel and, of course, the Enterprise. Found within are tantalizing glimpses of the Romulans (originally Vulcan stock that chose to leave Vulcan), Klingons who hate and fear Kirk but find him utterly fascinating, and a greater variety of aliens than could be seen in the TV episodes. Did you know that Kirk enjoys romboid cakes served either with a dressing or jelly? Just how many Alices did Mudd create? That Kirk, Spock, and McCoy has had enough dalliances to have fathered a small town of offsprings? That quivas are cultivated on Vulcan? That NCC stands for Naval Construction Contract? This reference is a MUST for the serious reader of STAR TREK novels.