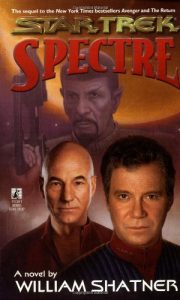 Retired and happily in love, James T. Kirk believes his adventuring days are over. But as he returns to Earth for the first time since his apparent “death” upon the “Starship Enterprise(TM) ” “NCi1701-B,” events elsewhere in the galaxy set in motion a mystery that may provide Kirk with his greatest challenge yet. The “U.S.S. Enterprise(TM),” under the command of Captain Jean-Luc Picard, is exploring an unstable region of space on a scientific mission of vital concern to Starfleet when they discover the last thing they ever expected to find: a lonely, battle-scarred vessel that is instantly recognizable to every member of Picard’s crew. Five years after being lost with all hands in the Delta Quadrant, the “Starship Voyager(TM) ” has come home! The commander of “Starship Voyager,” one Tom Paris, explains that Captain Kathryn Janeway and half of the original crew is dead, but if that is true, who is the mysterious woman who has kidnapped Kirk back on Earth, pleading with him to assist her against a threat to the entire Federation? All is not as it seems, and soon Kirk is forced to confront the hideous consequences of actions taken over thirty years before, as well as his own inner doubts. After years of quiet and isolation, does he still have what it takes to put things right — and save the lives of everyone aboard a brand new “Starship Enterprise?” Can he still become the man he used to be? An unforgettable saga peopled by old friends and ancient enemies, “Star Trek(R) Spectre” propels Kirk on a journey of self-discovery every bit as harrowing as the cataclysmic new adventure that awaits him. 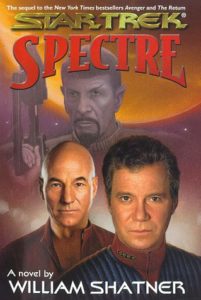