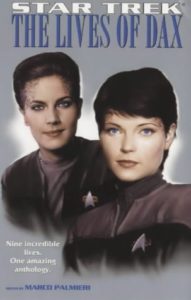 Nine stories by top SF authors view the whole of Star Trek history through one special character’s eyes. One of the most popular and compelling Star Trek characters ever created, Dax is a wormlike being who is joined body and soul to a succession of humanoid hosts. Each life is different, each body is different, each personality is different, but all of them are Dax. At one time or another Dax has been male, female, a Starfleet officer, a statesman, a scientist, and ambassador, even a serial killer. The symbiont’s humanoid hosts have included Curzon, friend of Klingons, and Jadzia, science officer on Deep Space Nine and latterly wife of Worf. The most recent incarnation is Ezri Dax, station counsellor on Deep Space Nine. Designed to appeal to fans of every version of Star Trek, the stories in The Lives of Dax each show a different host’s adventure – nine incredible lives stretched out over 357 years of Star Trek history. The stories are rich with different aliens, planets, battles, personal struggles, surprising revelations, and guest stars galore. 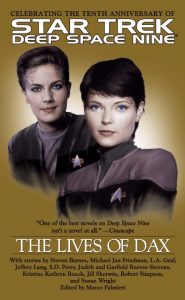