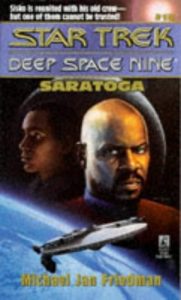 When the Borg destroyed the U.S.S. Saratoga at Wolf 359, killing Captain Sisko’s beloved wife, one chapter in his life came to a tragic end. Now painful memories are reawakened when the U.S.S. Defiant carries the survivors of the Saratoga to an important Starfleet ceremony. But Sisko’s bittersweet reunion with his old crewmates is cut short when an unexpected malfunction threatens the Defiant as well as the lives of everyone aboard. Even worse, evidence suggests that the accident was caused by deliberate sabotage.

Has one of Sisko’s oldest friends betrayed them all? Sisko and Dax must uncover the truth before death claims the survivors of the Saratoga.