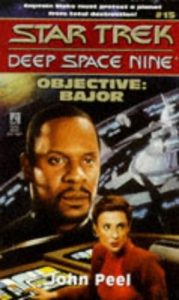 The Hive came from another galaxy: billions of alien beings living inside a vast, biological starship. They’ve already destroyed one planet, using it as raw material and fuel for their endless voyage through the cosmos, and now the Hive is heading for Bajor. To the Bajorans they’ve sent a warning, to evacuate the planet or die along with it. Determined to fight, the Bajorans assemble a battle fleet, but it’s hopeless against the overwhelming power of the Hive, and only by penetrating the Hive’s defenses to learn its guarded secret does Captain Sisko stand a chance of saving Bajor.