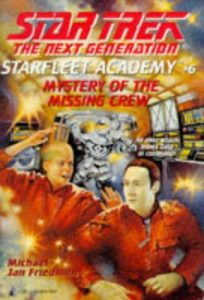 An android is found in the ruins of a colony on Omicron Theta. The crew of the Tripoli reactivate the android and discover his name is Data, a name that suits his incredible curiosity. With the encouragement of his new friends, Data applies to Starfleet Academy and is accepted.

Cadet Data begins his journey to Starfleet Academy aboard the science vessel, Yosemite. Even as he looks forward to the Academy, he struggles to find his own identity and to fit in with the other cadets.

But Data’s worries are cut short when the Yosemite is suddenly attacked by an unknown vessel and suffers severe damage. When power is restored, Data discovers that the adult crew has mysteriously disappeared, and only Data and the other Academy-bound cadets are left to face the wrath of a new alien race, who are demanding that Data and his cadet crew surrender their ship, or be destroyed.