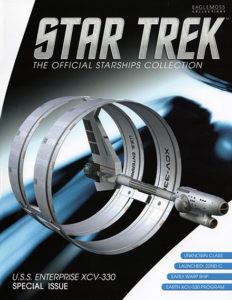 The most mysterious of Enterprises, the U.S.S. Enterprise XCV-330 has only ever been glimpsed in the Star Trek television series and movies. Its distinctive ring is based on one of Matt Jeffries’ early designs for the original TV Enterprise, and history places it somewhere between the space shuttle and Kirk’s ship. This Special Edition model of the U.S.S. Enterprise XCV-330, also known as the “Ring Ship”, has been carefully researched and is fully approved by CBS. This is your chance to own the rarest of all Enterprises.

The accompanying magazine explores the detailed design and specifications of the ship, as well as the ship’s history.