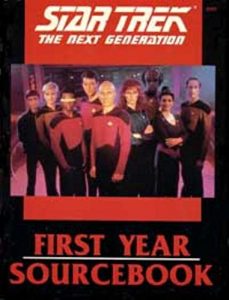 Update Your Game With New Stats!

The First Year Sourcebook gives information and game statistics based on the first year of the new Star Trek: The Next Generation television show.

With this book, you can integrate the characters, new civilizations, and equipment used in the first year of the show into your Star Trek: The Role Playing Game campaign.