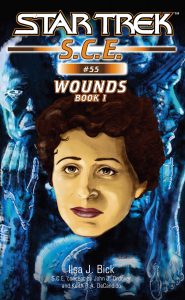 While traveling to a medical conference, the Runabout Missouri encounters a strange anomaly that sends the runabout crashing to the surface of an unknown planet, leaving its two passengers — Dr. Elizabeth Lense of the U.S.S. da Vinci and Dr. Julian Bashir of Deep Space 9 — separated.

Each physician thinks the other dead, and each winds up trapped with the factions of a decades-old conflict between those who want to replace dying limbs with cybernetics, and those who want to remain pure. Trapped with no hope of rescue, both Lense and Bashir must find their way on a primitive world — or die….