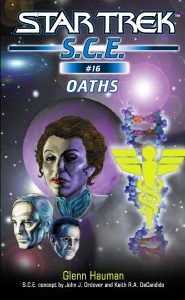 Dr. Elizabeth Lense has had a fine career. She was first in her class at Starfleet Medical – ahead of the genetically enhanced Julian Bashir — and a hero during the Dominion War, and is now the chief medical officer on the U.S.S. da Vinci. but Captain David Gold notices that her performance has not been up to snuff. She’s been listless and stressed, and is delegating most of her responsibilities to the da Vinci’s Emergency Medical Hologram.

Her malaise couldn’t possibly come at a worse time, because a virus has erupted on Sherman’s Planet — and the planet’s entire population, as well as the crew of the da Vinci, are now marked for death by the virulent plague!

Can Lense find her way out of depression to determine a cure? And will the cure the worse than the disease? 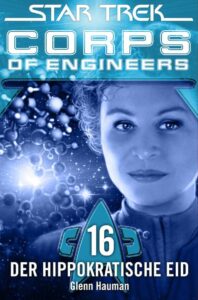