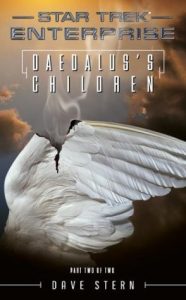 Crippled by a freak accident, Enterprise has crossed over into an alternate universe — and into the middle of a civil war set off by a brutal warlord who has used technology stolen from the Daedalus to enslave his people.Forcibly removed from their ship, imprisoned and brutalized by their captors, Captain Archer and crew soon find themselves confronting an even more immediate challenge than escape — subtle biochemical differences in this universe that make their continued survival an impossibility. Every hour they spend in this parallel continuum brings them closer to death.

Yet Archer discovers that in order to recapture Enterprise, he may have to cripple his ship once again. And even if he manages to find a solution to that dilemma, one last survivor of the doomed flight of the Daedalus stands between Enterprise and her safe return home….