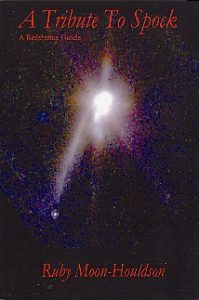 A Tribute to Spock is a reference book designed especially for fans who are new to the world of Star Trek. Many years of hard work and diligent research has contributed to what one sees within the covers of this book. Here one will find facts behind the fiction and gain insight into their favorite Star Trek characters. Little known facts, trivia, input from fans across the globe, accounts as told by the actors themselves at conventions, as well as submitted work from fans, have all been compiled into this one reference work. This is a lifeline for the fan who is new to the world of Star Trek. Here one can get their feet wet and discover answers to questions they were afraid to ask. It is never too late to join the vast world of Star Trek. For those who feel they are behind the times or have journeyed off the beaten path, grab a chair, sit down, and lose yourself once again in the most magnificent world ever created… the world of Star Trek. This book is written as a Tribute to Spock for his undaunted and steadfast loyalty to his friends and the role he played in the greater universe. This book is also written as a tribute to Nimoy who brilliantly portrayed the character we have all grown to love and respect.