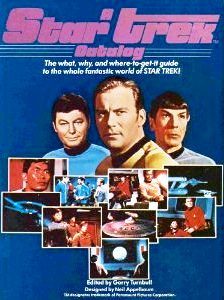 Now you can explore new worlds of the Star Trek phenomenon! Here are some of the features of this one-and-only guide to the expanding Star Trek universe:

* The first complete collection of Star Trek episode summaries from “The Man Trap” (number one) to “Turnabout Intruder” (number seventy-eight). Anecdotes, facts, and short plot capsules. And the same goes for the animated series as well!

* A special interview with Gene Roddenberry

* A catalog of toys, games, models, costumes, and other Star Trek accessories, complete with manufacturers’ addresses.

* Biographies of the stars who made the series what it is: Shatner, Nimoy, Nichols, and others. Vital statistics, acting credits, and much more information no fan should be without..

* Novelist Stephen Lewis on the Star Trek conventions and what they really mean to the fans. There’s much more to it than you think.

This is the ultimate guide to the Star Trek phenomenon!