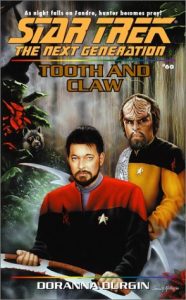 Ntignano was a populated world with a perfect sun — until the right technology fell into the wrong hands. Now the sun is failing quickly, and the “Starship Enterprise(TM) ” has just one chance to evacuate the ?eeing refugees. Captain Jean-Luc Picard must succeed in delicate negotiations with the only people who can help them: a prickly neighboring species known as the Tsorans. To assist in that effort, Commander Will Riker was assigned a very different diplomatic task. As a polite formality and show of good faith, he accompanied a young Tsoran prince to an exclusive hunting preserve. There, technology-damping ?elds and some of the galaxy’s deadliest predators were supposed to test the untried noble’s ability in the “kaphoora” — the hunt. But the shuttlecraft didn’t land on Fandre; it crashed. Now, cut off from Tsora and the “Enterprise,” the survivors of the disaster face the ultimate struggle for survival. Without the aid of tricorders or phasers, Riker, his royal charge, and their would-be rescuers must ?ght for their lives with the only weapons they can muster — spears and “bat’leth,” tooth and claw.