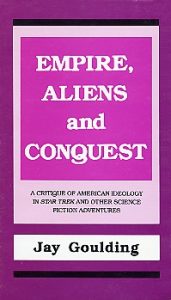 A critique of American ideology in Star Trek and other science fiction adventures.

On land, on sea and now in space, the United States in its tactics and goals seems as ruthless and instrumental as the Soviet Union. The powerlessness of everyday individuals comes to the forefront when we recognize how little impact peace protest has on warrior nations. In the 1960’s, the American power wielders feared war protesters who rejected the frontier spirit and its consequences, especially in the Third World. At a time when the U.S. had acquired a questionable world profile, television shows like Star Trek emerged to resurrect the American Dream, to give a disenchanted American populus something to hope for, a new religion to grasp onto and worship, a new frontier to explore, one far from the problems of the Twentieth Century. But what is the morality of shows like Star Trek? What do we find beneath the surface glimmer of the brave characters? What is the politics of the universe that they live in? Is science fiction a mere journey into the fantasy of the future or does it subtly reflect the presuppositions of American culture and politics? Are the prejudices and contradictions of that society mirrored in television? The first and foremost ‘strange new world’ that Trekkers ought to explore is their own — the one conspicuously absent from the television series. Can we discover other forms of relations outside of war and destruction? Are our dreams to be banalized with a future that looks like the mystical star-spangled days of the wild West? The thrust of Empire, Aliens and Conquest is to invite readers to reflect on how political values portray themselves in popular culture.